(Well, you can now add last night’s devastating Patriots loss to the Denver Broncos to the listing of Boston sporting events where I just should have been put in the bathroom instead of watching.  We would be 11-0 if I was sitting on the throne instead of my couch.

A little throwback blog from a couple years back since any creative thought is not entering this post-Thanksgiving depressed head case.)

Can I Be Frank?: Put Me in the Bathroom

Another one for the ages in the world of Boston sports.  The Boston Bruins overcame a deficit that seemed conceivably impossible last night.  Trailing 4-1 with ten minutes to go in series clinching Game 7  on their home ice at TD Garden in the first round of the NHL Stanley Cup playoffs, many fans and believers, (including yours truly) was ready to throw the towel and “see ya next year.”  But this was not the case.  In magnificent fashion, the Bs turned this lopsided lead around, scoring three goals (two in the final 90 seconds of the game) forcing sudden death overtime which ultimately resulted in the winning the game 5-4 and taking them to the Eastern Conference Semifinals against the New York Rangers.

Well, the win was bittersweet for me, to say the least.  I have a confession to make and I truly hate to admit this but I shut it off literally seconds before the true excitement began.  With just under three minutes remaining in the game and the Bruins still trailing 4-2 I gave the proverbial ‘it’s over’, changed the station, rolled over and went to sleep.

I woke at about 3:00AM and decided to get a drink of water.  Made the critical mistake of taking a peak at the iPhone.  Quick check of email, texts and Twitter.  In my one-eye-open state of mind, I started to catch comments about a Bruins WIN??!!  What???  HUH? No friggin way!  I read on….

Tweets from all walks of life…”#Bruins make historic comeback”

I won’t even throw out all of the frantic Facebook fodder.

I’ll get to that in a second.

Mob movie classic ‘A Bronx Tale’ has a memorable scene where all of the gangsters are in a crowded back room gambling; specifically playing craps.  As the lead Mafioso, Sonny LoSpecchio, continues his hot streak he fears some of his observers could deliver some bad luck.  What does the Boss do?  Instructs that these so-called “jinxes” be ‘put in the bathroom’ while that dice is rolled.

Great movie scene that I recalled as I watched the incredible highlights of the game I purposely tuned out for lack of belief.  And then it became clear; I should be put in the bathroom too.  Put in the bathroom during all critical Boston sporting events.  I really should.

Not only was this evidenced in last night’s miraculous Bruins win, but it happened years back in, perhaps, an even more memorable Beantown moment.

Our beloved Boston Red Sox versus century old rival the New York Yankees.  Game 4.  Sox trail in the American League Championship Series 3 games to 0.  Facing probable elimination to their hated arch nemesis late in the game, I decided to do the same thing I did last night.  Quit.

“Bleeping, bleeping Sox.  Sick of this shit.  Breaking my heart again.  Not doing it.  Aaron Boone did it last year.  Not doing this again.  I’m not.  Not a chance,” my inner monologue screamed as I shut off the TV.

See ya next year.

And of course we call know what happened next.  Dave Roberts steals second base (perhaps the greatest steal in Red Sox history).  Bill Mueller singles Roberts in to tie the game 3-3 and it to extra innings.  David Ortiz hits a 2-run home runs in the bottom of the 12th inning leading the Sox to a victory.  All while I was watching the back of my eyelids and history wasbeing made.  This amazing win clearly shifted the momentum to the Sox that would ultimately carry them through not only the ALCS, but later to their first World Series title in 86 years when they uneventfully defeated the St. Louis Cardinals in just four games.

I should be put in the bathroom.

Amazingly, I never seem to ever miss a play, pitch, shot, hit or hoop when our team is defeated.  (READ: Superbowls XX, XXXI, XLII, & XLVI)  Never.  Ever.

But fear not Bostonians, this ‘jinx’ has made a conscience decision to CONTINUE to make this mistake again when the opportunity presents itself; only this time on purpose.  If I find the Bruins/Sox/Celts/Patriots in a dire situation that seems impossible to overcome I will do the right thing, quit on the team and head for the restroom.  For if I do so, I can guarantee victory.

So, best of luck Boston Bruins in round 2 and beyond.

If you need me, you will know where I will be. 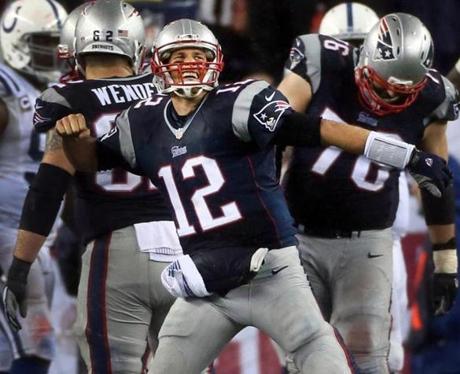 (Associated Press)
As he drove home from the AFC Championship Game, Patriots defensive tackle Vince Wilfork came upon an overturned SUV, and he’s now being praised by the state police for coming to assistance.

According to the Massachusetts State Police, when troopers responded to a call about the overturned SUV, they found that Wilfork was already there, standing beside the vehicle and asking the driver if she was OK.

The driver wasn’t able to get out, so a trooper held the driver’s side door open while Wilfork reached in and pulled her out. The troopers thanked him for their assistance and said they’d take it from there, so he went on his way home.

The woman Wilfork pulled to safety was charged with operating under the influence of alcohol and negligent operation of a motor vehicle.

So, let me get this all straight in my head because, to be honest, I am shaking off the cobwebs (and by ‘cobwebs I mean ’16 Bud Lights’) from last night’s Patriots’ AFC Championship winning effort; Vince Wilfork helped save a broad…on his ride home?  So basically, the big fella played in almost every defensive snap as he and the Hometown 11 beat the living horseshoes off the highly outmatched Indianapolis Colts 45-7, and then decided to play Superman on the ride home?

While I have never played defensive line at the professional football level (mostly because of disciplinary issues, mind you) I have to believe your body is a bit tired and sore after rubbing against other 900 lb dudes for 3 hours in the rain?  No?  Maybe I am a pussy, but Vinny is pretty awe inspiring and a fan favorite.  And now….

Picture this; you just won one of the biggest games of your pro football career.  You are headed to the Super Bowl (again, yawn).  All you want to do is crush that XXXL steak and cheese sitting on your lap and get home for a much deserved massage from your old lady, when all of a sudden he thinks…

What’s a Pro Bowler to do?  Another day in the life of a Patriot.

VW (ironically, he has the same initials as a car he weighs MORE than) pulls over, puts the sandwich on the passenger’s seat and saves the day.

What do you think that big-mouthed Lil John look-alike Seattle Seahawk Richard Sherman did on his way home?

Probably tightened his braids, tweeted some trash talk and grabbed a gold tooth at the Jerk Store?  YEAHHHH!

That’s why, Seattle, you should be starting to form that proverbial dump in your rain-soaked pants right about now.  This is not Indy or Denver converging on Glendale, AZ in 13 days…this is the New England Effin Patriots.  6 SuperBowls with the Hall of Fame Sunday brunch combo of Brady and Belicheck coming at ya…full speed.

I hope that handsome playboy, Pete Carroll, has more than high 5s and a loose stance on morals to back you all up.  Loud talk, gold cleats and the Space Needle won’t help you here.  Your ’12th man’ will be back at home wishing they lived in some other American geography and mumbling about Steve Largent.

Here we come and we are packing Super Heroes for the Super Bowl.