Its that time of year again when we all distract ourselves with the Christmas season so we don’t have to come to grips with the fact we won’t see the sun for 3 more months. Before there was Netflix, DVDs, and the internet, we all waited for this time of year to see our favorite specials on television. I thought there was no better time than now for me to revisit some of these with my own kids. So, once a week I’m going to sit down with the family and review a beloved childhood favorite until Christmas arrives. I may have a few Slainte’s throughout the course of the viewing but hey…

“LAYOFF ME IT WAS A LONG DAY”

The first review of the season is… 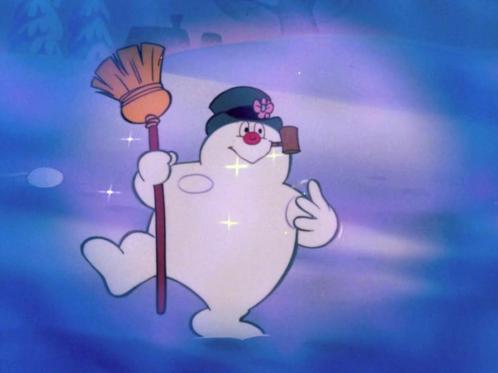 The special starts out with a cartoon version of Jimmy Durante dancing around and using every ounce of energy not to sniff up the entire town with that giant cartoon schnoz. I know Durante had a big nose in real life but this thing looks like he could sniff a line of cocaine out of Khloe Kardashians arm hair.  Durante is the narrator of the story and in between his own Crown Royal pulls and ‘snow’ bumps we see a school in the beginning of the program.

For whatever reason there is a terrible magician trying to pull “Hocus” the rabbit out of a hat. What kind of school has fucking Magicians?  The only magic I ever saw in school was the health posters telling you not to high five kids with open hand wounds.  This shitty magician throws the hat away not knowing that it was magic.  He was probably more worried about the little girl he tied to the train tracks.

Now we see all the kids are playing outside and they decide to make a snowman. They are all doing there part and then one of them says to Karen (clearly, the slutty one) “You make the head“.  I laughed harder at that line then any joke I’ve heard in a month. As we all know they name the snowman ‘Frosty’.  However, one kid actually threw the suggestion to name it ‘Oatmeal‘ which would been way better for fuck sake.  You meet a guy named Oatmeal you know there is a great story behind that name. Calling him Frosty was just plain lazy. Peehole, Tincup, Chesty Larue, Beast, Oatmeal; now those are great nicknames and not just an observation like these boring-ass, unimaginative  kids.

While I have no understanding of the Nielsen system, I would bet a corncob pipe and button nose that if this special was named Peehole  the Snowman it would have tripled Frosty’s ratings over the last 1/2 century.  That’s Branding 101, people.

Anyway, the magic is in the hat that brings this Olaf-on-steroids to life. But why the pipe? Nowadays if you see a white guy with a top hat and a pipe you’re probably in a yoga class in Brookline listening to The Avett Brothers.  So, the kids become friends with the snowman, try to keep the creepy (most likely registered Level 3 sex offender) magician away from getting his magic hat back. They try to get Frosty to the North Pole to a save his life… blah, blah, blah, kids crying, Santa gets involved, he is made of magic Christmas Snow, he dies, comes back, Blah, Blah, Blah.

Bottom line, I fucking hate Frosty.  Its terrible.  If I was in this cartoon I would have thrown a Duraflame at him the minute I saw him. Bunch of naïve kids hanging around with a giant fat white guy? Sounds a lot like John Wayne Gacy if you ask me.

(Not to mention The Challenge is on MTV right now. Yeah I know.  Plus this year everyone is partnered up with family members. Can you imagine the fights? Shit I fight with my brothers over how many incompletions Brady had Sunday, never mind over competitions involving carrying a lemon in your ass cheeks for half a mile. In reality its must see TV this holiday season, even if only to see the broad that looks like cousin Leo from Seinfeld.  HELLO!)

Just a really bad effort even for 1969 standards. Next week we get to some actual good shit.