Let’s get something straight, “It’s the thought that matters” is an old holiday expression coined by losers that sucked at giving Christmas presents.  It’s December 9th already.  It’s time to get your heads out of your asses and start getting serious about honoring the men in your life to the fullest.  Don’t be a loser.

The bad news is that science has proven that shitty gift giving is a genetic predisposition that will haunt your life forever.  Fortunately for you, that doesn’t matter this year because every guy is asking for the same thing: something from The Life of Burt Reynolds collection.  No Malls, No crowds.  Just go ahead and spread out on your comfy couch with a glass of Riesling and a credit card, and let your imagination guide you.  I took the time to hand pick the best of the bunch for your and rated them using the Burt Reynolds Mustache Rating System:

5 Staches being the greatest gift since they invented Jesus to add a little depth to the holiday. 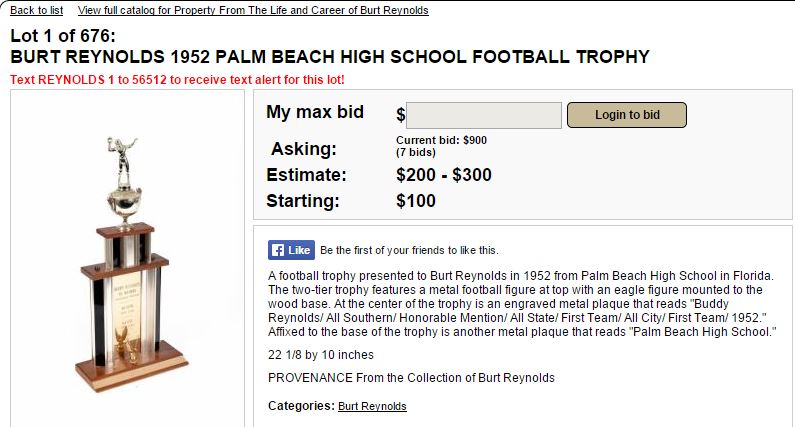 “A football trophy presented to Burt Reynolds in 1952 from Palm Beach High School in Florida. The two-tier trophy features a metal football figure at top with an eagle figure mounted to the wood base. At the center of the trophy is an engraved metal plaque that reads “Buddy Reynolds/ All Southern/ Honorable Mention/ All State/ First Team/ All City/ First Team/ 1952.” Affixed to the base of the trophy is another metal plaque that reads “Palm Beach High School.”

Fantasy Football blows.  I’m in four leagues, they all suck. But if you’re telling me Burt Reynold’s 1952 High School trophy could potentially be starring on my mantle, I’m back in.  Grab this piece of hardware for your favorite guy and he’ll be at the top everyone’s league invite list next season. (AKA, you get to captain the remote control… and its Bravo marathon’s for the entire month of August.)

“A print of a black and white photograph featuring tennis legend Martina Navratilova. Navratilova has inscribed the photograph “Dear Burt- / this is where the/ action is!/ Martina” in black marker. Framed.”

Martina Navratilova, one of the greatest Tennis players ever and perhaps the first universally accepted gay athlete…telling the Wayne Gretzky of sex symbols that “This is where the action is” is the funniest thing these eyes have ever seen.  I am woefully immature, and ignorant.  So is the guy you’re trying to buy a gift for.