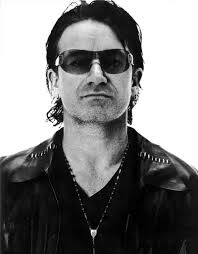 Bloomberg – A private jet carrying Irish rock star Bono, the frontman of U2, had its baggage door shear off mid-flight during a trip between Dublin and Berlin.

The hatch and bags from the Bombardier Inc. (BBD/B) Learjet disappeared over German territory during the flight yesterday,Germany’s air accident investigation bureau said. The jet landed safely at Berlin’s Schoenefeld airport at 12.26 p.m.

“A door on the plane to the cargo hold became detached, and apparently two pieces of luggage fell out,” the bureau said. “Bono was on board. We are investigating the incident.”

The Learjet’s baggage compartment is located in a rear section that’s separate from the passenger compartment, said Paul Hayes, a safety expert at London-based Ascend. Since the hold isn’t pressurized, passengers would have been in no danger of being sucked out of the jet when the door opened, he said.

“It happens on average about once a year, somewhere in the world,” Hayes said of the luggage-door separation. “Normally it doesn’t produce any disaster.” Such mishaps generally occur when the locking mechanism isn’t properly engaged, he added.

Imagine you are Franz Von Haagendas.  You have just lost your 3rd shitty factory job in a row.  You are walking home to explain to your ugly, Hitler-disciple of a wife that already hates you.  And now,  you have to tell that Schlampe you have no more Francs for the rent because you blew the lot of it on Steins and Schnitzel.  You are contemplating suicide and then all of a sudden…BOOM.

Not one, but two mysterious suit cases land at your feet.  Like a gift from the heavens.  You look to your left, then to your right.  Not a Krout in sight, so let’s have a look inside, shall we?

Franz opens bag #1 to find…..good lord.  63 pairs of sunglasses, 46 varieties of Rosary Beeds, a few pairs of midget boots/”lifts” (you know, the kind that make you taller, right Mr. Hewsen?) and a 856 pictures of Bono, each autographed to himself with the phrase “I feckin love you, Paul! Your #1 fan, Bono”

On to Bag #2.  My, my, my…yup, it’s a giant bag of cash.  Enough to never work again.  Enough to leave that old Bratworst with eyes.  Enough to make it rain for the Kaiser as you piss on him in the middle of Oktoberfest.  We’re talking SPRECHEN SIE DOUCHE  money, B!

At least that is my dream for what possibly happened.

Nothing has gone right in Germany for Bono since the ’83 show when he took a FALL-ein,